This weekend brought news that we were in for more snow Monday. I have seriously had my fill of winter!!! I could wait no longer for spring…if the real blooms aren’t happening, I was going in search of some faux ones. Normally, I’m not a fan of silk flowers and fake plants, but Michael’s has some beauties. And I needed a visual reminder that, YES, it IS Spring even if the weather says otherwise.

I took a nice little haul home from Michael’s where their Garden Collection line from Ashland  was on sale. I picked up these little pieces…succulents attached to cute mossy rocks. The mossy ‘rock’ base was made from styrofoam and I found they wouldn’t stay where I put them as the plants made them top heavy.  I fixed it with sticking in a tooth pick into the bases and driving them down into the crushed gravel. I already had the metal planter and pebbles so this project just cost me $1.69 (a great sale!) for each succulent grouping and $3 for the crushed gravel…$8 all in, and I love it! 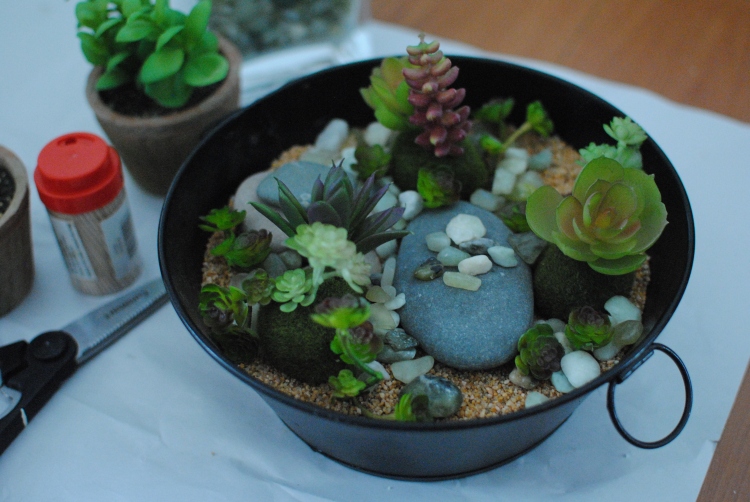 Aren’t they as pretty as the real deal ?! I was so enamoured by these that I was inspired to make a miniature version.

As with real succulent gardens…less is not more. You may want to leave some empty spaces for a place to rest your eye, but keep them minimal. People who design succulent planters always go all out, filling all the nooks and crannies. And at first I wasn’t happy with my planter until I added the large rocks. You can do the same with your miniature garden…if you don’t have any pebbles, you could make them from your clay.

I found a lovely combination of clay colours to make the translucent-green base for the succulents. Pictured below is the combination I used left to right : translucent sculpey, wasabi, treasure (to make it glisten a bit), and olive. You can gauge how much is needed by my cutting mat. This was enough to make all the plants (with the exception of the dark green one).

…and this is the colour you end up with after mixing them: 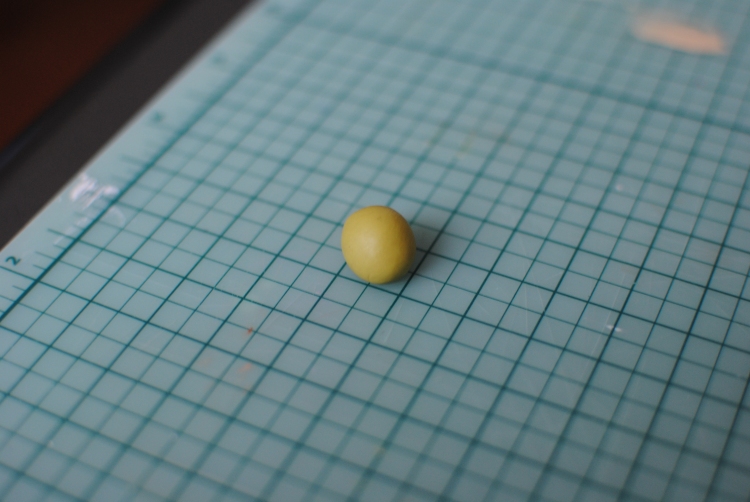 Also, I found toothpicks a great help for building my plants around. I could also use them in a bowl of rice to stand them up while baking. Then I just snipped them off before assembling my garden. 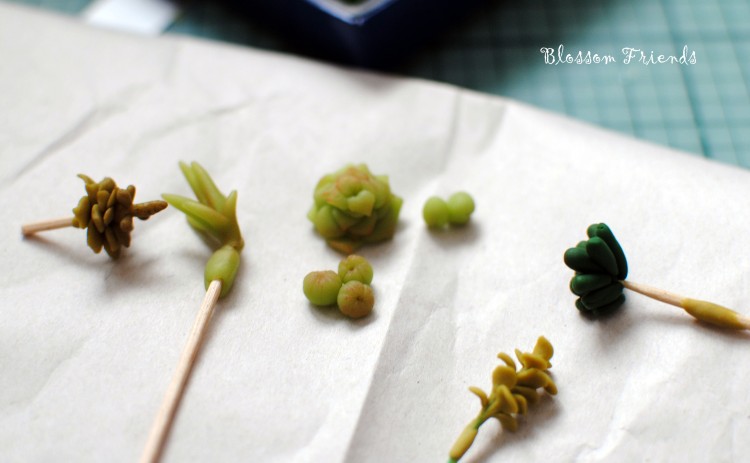 As a focal interest, I chose to make a little pagoda. I love how it turned out; primitive and cute! I formed the roof first, and pre-baked that before continuing with the rest of the building. This, I also did on a toothpick. 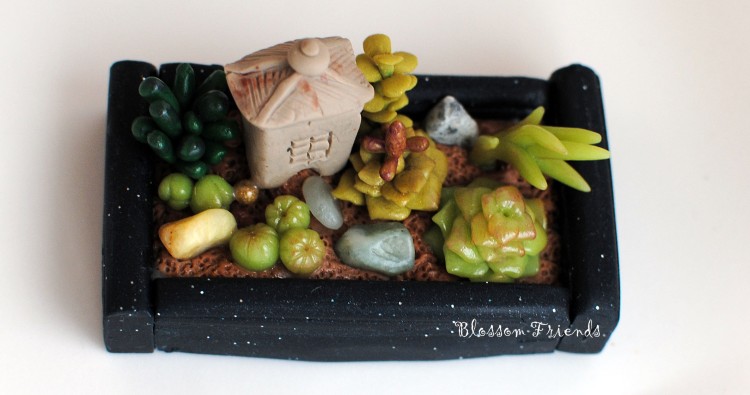 I chose Fimo Effect “stardust” to mimic slabs of black granite. They are bonded together with liquid sculpey. I plan on sanding it and buffing it out to a nice shine later.

I used chalk pastels to add subtle red blushing to the leaves. I used a mix of glaze and purple acrylic paint to colour the top of the center plant, but it didn’t show as purple. I will try to carefully add another thin layer later.

Both planters were fun to do. I am, of course, most pleased with the miniature one. I didn’t go to a botanical reference book…this was all about fun and freely sculpting. I think, in the process, I took the liberty to create some new species of succulents!

Now…if only the snow would go away so I can grow a real succulent garden outside!

I create miniature food sculpts (mainly dollhouse scale), out of my home, in the Annapolis Valley of Nova Scotia. I live surrounded by the beauty of local orchards and rolling farmlands. When my kids leave for school, I set to work, often in my pajamas, with my clingy miniature schnauzer, Lenny, at my feet. I create only what interests or inspires me. My focus is on quality not quantity. While I often have only a few pieces available, they are very detailed as I continue to build my skill. If you are interested in having me make you something special, please visit my Facebook page and leave me a message https://www.facebook.com/blossomfriends/ View more posts

7 thoughts on “A Mini Succulent Garden”