I’m determined for my English cottage dollhouse to have a little garden. In that garden will be lavender, a bench, some dainty flowers, and this koi pond. And a zen like peace.

I made this using a mason jar band as a base. First, I formed a cane for my bricks using white, beige super sculpey, and tan, which I squashed and twisted together to get a slightly marbled look (It kinda resembles quartz when textured). I pulled and gently coaxed it into a long cane, shaping this into a rectangular brick shape. This will make a tonne of bricks (haha) with a good size cane to spare. I’ll wrap the cane in cling wrap and use it whenever I need to do quartz stonework.

Next, I added a layer of black polymer clay for the bottom – which I press into the inner band.I bake this for 10 minutes at 250 degrees celsius, then allow it to cool.

I sliced individual stones from the cane, and pressed them into the ring (inside and out). I used smaller random stones to fill in the top. Then I coated the top edge of the band with a bead of liquid sculpey all the way around. I cut some more stones and layered them on the top, creating a ledge. This gives your dolls a spot to sit and gaze into the pond while contemplating the meaning of life.

I textured all the stone work with tiny ball tools and a tooth brush. I cut out small chunks with an x-acto knife. The inside seam at the bottom was filled with a generous bead of liquid sculpey. This helped prevent the resin from seeping out later (or most of it, it seeped a little).

Don’t worry about the other small gaps between stones. They will look great after they are grouted.

Now I did a final bake. I baked mine for 30 minutes at 250 degrees celsius. You can bake according to the manufacturer’s recommended time but I like to bake my pieces at a lower temp and for longer.

After cooling, I used a light weight spackle to grout between the stones. Excess spackle was  wiped away with a damp rag.

After drying, I added some patina. I used watered down burnt umber paint.

When this is all dry,  a bit of debris was sprinkled on the bottom of the pond. I used sand, pebbles, and cut up moss. 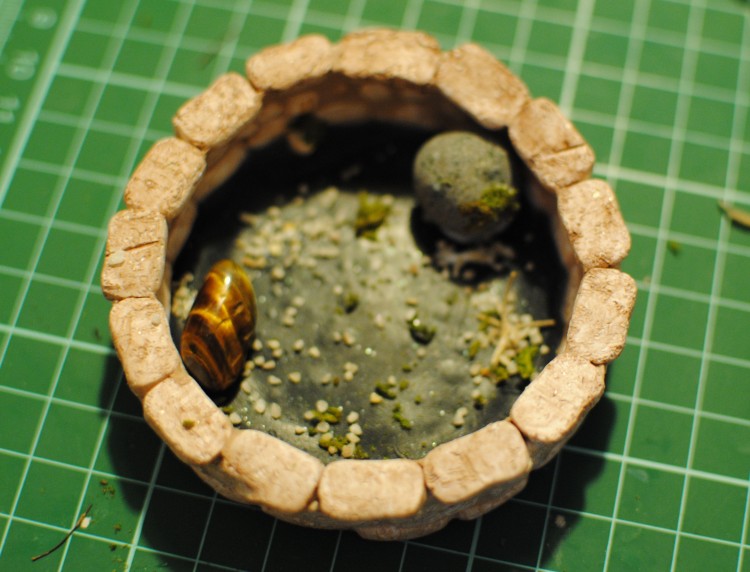 Now I created a simple water pump. I winged mine, and I don’t have a pattern, but it’s basically a simple box and spout. From the spout, I attached a thin strip of plastic to catch resin droplets and become my stream of water. I added copper wire at the back and inside the spout for realism to mimic pipes. The bottom of the wire will later be hidden by some foundation plantings.

To fill the pond, I used a 2 part resin mixture. It will take your pond a full day to cure.

**A word of caution: resin does have some harmful properties and it is insanely messy! Children should not use resin.** Use gloves. It’s almost impossible to remove, so protect all surfaces and keep in mind you will probably be throwing away whatever tools you use. Even the mixing cups. So use inexpensive cups and a popsicle stick for stirring.

I started with 4 tsps of the resin. This was just for a first layer to lock in the debris and pebbles/sand where I placed them. I saved some resin towards the end and let some drops travel down the plastic strip to start building up my stream of water. I let this start to solidify for several hours. I then snipped some very small pieces of moss and let them drop in for debris. When this is solid to the touch, I placed in my fish.

I slowly poured in another batch of resin (the same amount). This brought the level of resin close to the top. I left this for a day to fully cure. 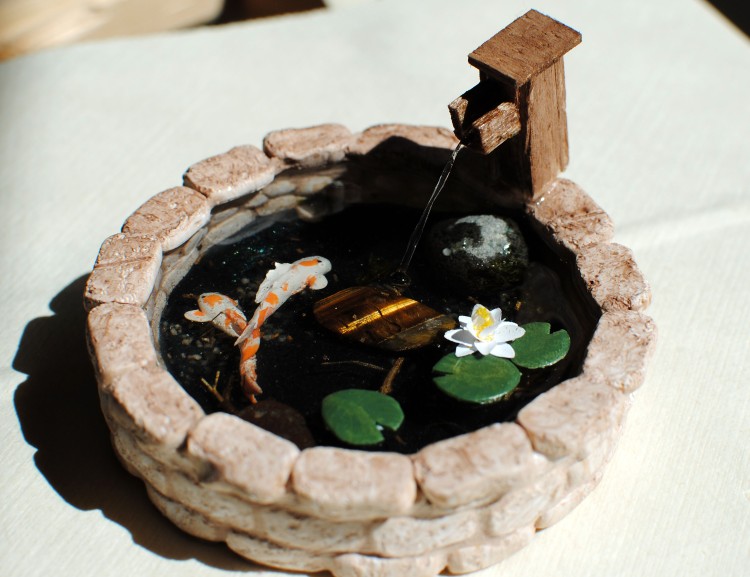 I then added lily pads and flowers to the surface.

These aren’t just great for dollhouses. They would make a sweet paper weight on someone’s desk. For those moments when you need to zone out from your work.

I create miniature food sculpts (mainly dollhouse scale), out of my home, in the Annapolis Valley of Nova Scotia. I live surrounded by the beauty of local orchards and rolling farmlands. When my kids leave for school, I set to work, often in my pajamas, with my clingy miniature schnauzer, Lenny, at my feet. I create only what interests or inspires me. My focus is on quality not quantity. While I often have only a few pieces available, they are very detailed as I continue to build my skill. If you are interested in having me make you something special, please visit my Facebook page and leave me a message https://www.facebook.com/blossomfriends/ View more posts

5 thoughts on “A Miniature Pond Tutorial”